We conducted a science trial over three months in two 3rd grade classrooms of 23 students each. The teachers were familiar with the TERC-developed curriculum unit: Inquiry Project Grade 3, Investigating Things in My World, 17 sessions, focus on nature of matter (materials, weight, standard measure, volume).

Students in the trial classroom had science notebooks designed for a tablet; the control class used paper versions. The content of the notebooks was identical although we redesigned each 8 ½ x 11 notebook page to fit the smaller tablet screen.

The trial class was scheduled to have science for 45 minutes on Thursdays and Fridays, last period. Due to snow days, holidays, and teacher illness, sometimes students had science once a week only.

In a typical science class, the teacher planned and led all activities. We were present to support the technology and science activities. We distributed tablets to students and collected the them for charging at the end of a class. We observed students during class, took notes, and were available for trouble shooting.

Questions we wanted to explore were the following:

1. Was it easier and/or more motivating for students to make notebook entries on tablets?

Figure 1: Student notebook page showing use of color for clarification 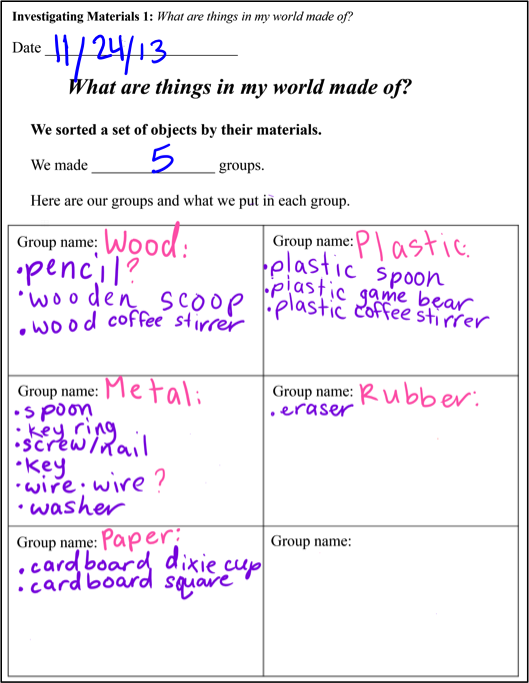 Looking back at the total experience, the teacher felt that in some cases the intrigue with the tablets was in competition with a conversation with a teacher or with the hands-on science activities.

2. In what ways did student entries on tablets differ from paper notebooks?

Writing. Students seemed to write bigger on the tablet than on paper. While not systematically studied, students often chose to use thicker lines for writing on the tablet, perhaps for the bolder appearance on the page. The teacher speculated that the lack of friction between the pen and the glass surface of the tablet might have made letter formation a little harder to control than using pencil and paper, and thus account for bigger writing.

Some students seemed unconcerned with the appearance of their data entries, perhaps because they knew how easy it was to erase and improve their work later.

Where students were prompted to write reflections in their notebooks, the volume of writing and amount of detail varied more from student to student than it did from trial to control classes. The quality and volume of student notebook writing was more a function of time allotted to writing rather than whether notebook entries were made on tablet or paper.

Drawing. A comparison of observational drawings on tablets and paper did not reveal striking differences in student work. Observers who saw drawings done in both classrooms noted that students seemed to erase more often on the tablets whereas students tried to get it right the first time with paper and pencil. The differences in process or product did not seem significant. In one case, an investigation of the weight of very tiny things, the teacher observed that the ability to choose pen width made it much quicker and easier to draw the pieces of modeling clay on a weight line.

Doodling. Students quickly discovered the ability to erase an uninterrupted stroke of the pen. A few students never seemed to lose their fascination with covering a page with scribbles and then, with the touch of the pen, having the mess disappear. Students who keep pencil and paper notebooks are typically instructed to use the notebook pages for science drawings and writing only. This convention was harder to reinforce with the erase function on the tablet. Eliminating the erase-all button and more explicit instruction about what goes on a science notebook page would likely alleviate this problem.

3. Would tablets enable/encourage the teacher to review notebook entries for formative assessment purposes?

Each time a student completed his or her entry, the notebook page was submitted to the teacher. Thus the teacher had a complete set of all student pages in one place on her tablet. This enables a teacher to quickly scroll through and review a set of work for formative assessment purposes while looking a single screen, in contrast to leafing through a stack of 23 paper notebooks.

The teacher in the trial classroom explained that she typically looks at notebook entries as students complete their written work during class and does not review work after class or give feedback. When she did use the tablet to review a set of notebook entries, she agreed the ability to look a class set or at an individual student’s entire notebook would be a helpful formative assessment tool.

In this curriculum, students are frequently asked to collect data as they work in small groups. Data analysis typically is based on class results. Often a significant amount of classroom time is spent recording group results on a class chart. A feature of our tablets is the ability to send group data to a class chart that appears on the teacher tablet and is projected for the class to view. The teacher is able to facilitate analysis and explanation by annotating or highlighting the class data table.

This feature of the tablet worked as the developers had envisioned: The class table was completed efficiently, students were able to see clearly which row of data came from their group data. Critical scientific practices include analyzing and interpreting data, constructing explanations, and engaging in argument from evidence. These practices depend on collated class data and all too often more time is spent recording group data than discussing it. In this trial, speeding up the collating process left time for the valuable meaning-making activities. The affordances of this feature of the tablet software should not be underestimated. In one case students were able to see there was more than one way to represent the same data. See Figure 2.

Teacher annotations helped students understand the structure and organization of a data table and highlighted patterns in the data. The annotated full class data table was then saved to all notebooks. See Figure 3. 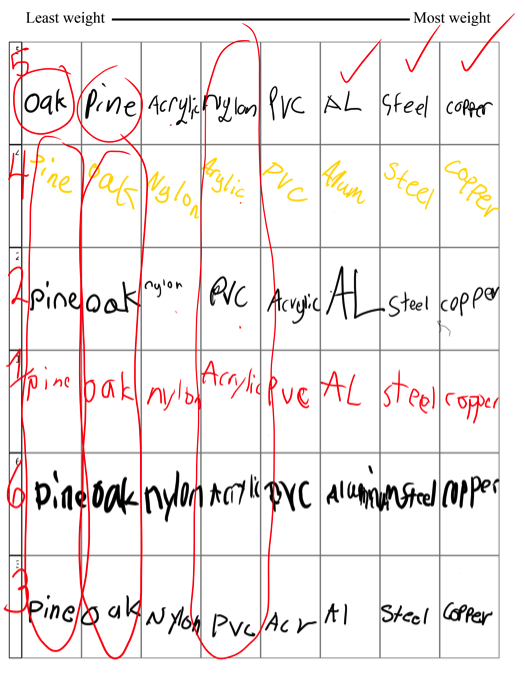 Students learned to use a web cam and in an investigation called the 10-10-10-10 challenge, students were able to quickly create a record of their own construction and annotate it. This resulted in a far more accurate record of group work than a pencil drawing in the paper notebook. This feature of the tablets holds great promise for other curricula. See Figure 4. 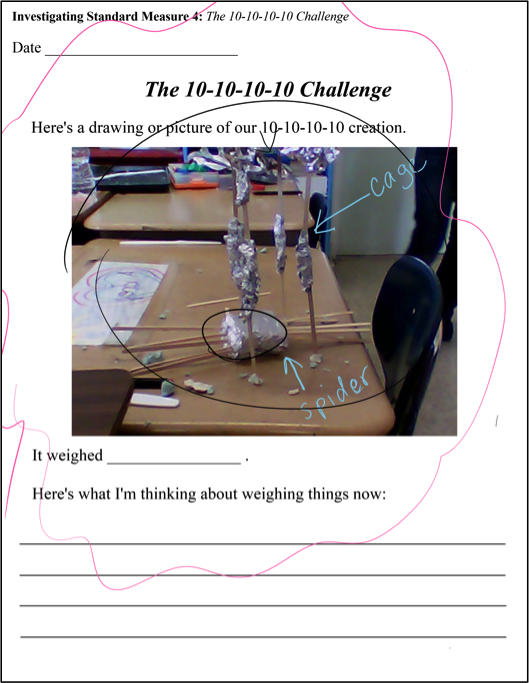 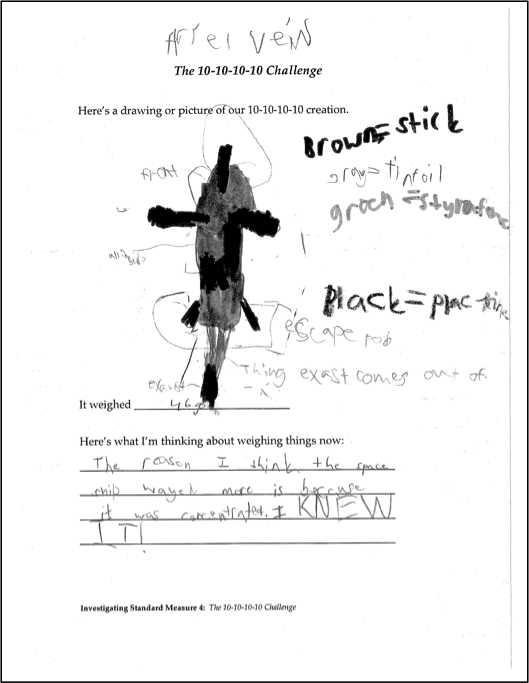 6. In what ways did the tablet support and enhance class discussions?

In addition to speeding up the collation of class data and thus providing more time for class discussions, the tablet allowed the teacher to select and project more than one example of student work for the class to critique. The ease with which the teacher could show multiple examples of student work put the focus on thinking and reasoning rather than logistics of displaying student work. The teacher’s ability to highlight and annotate projected notebook pages or class data tables supported young students’ introduction to data analysis. See Figure 5. 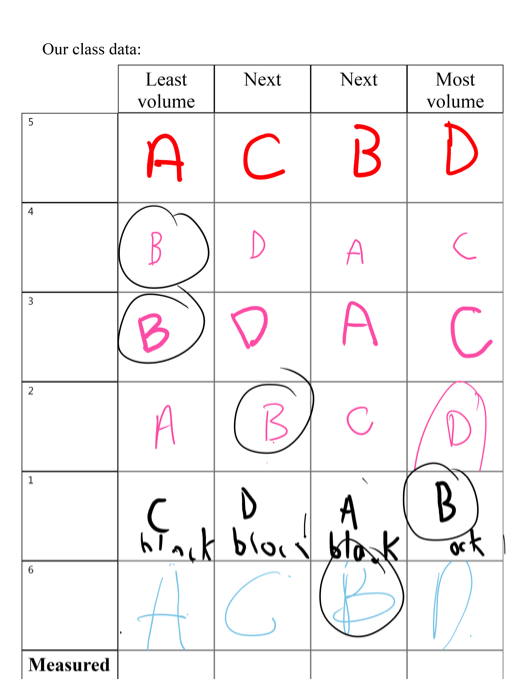 The tablet played an important supporting role in class discussions. Two critical factors were (1) the ability for small groups to submit data and see it immediately displayed in a collated data table thus saving class time for discussion and (2) the teacher’s ability to annotate data displays using color and text supported students as they learned to make claims backed up by evidence from their data.